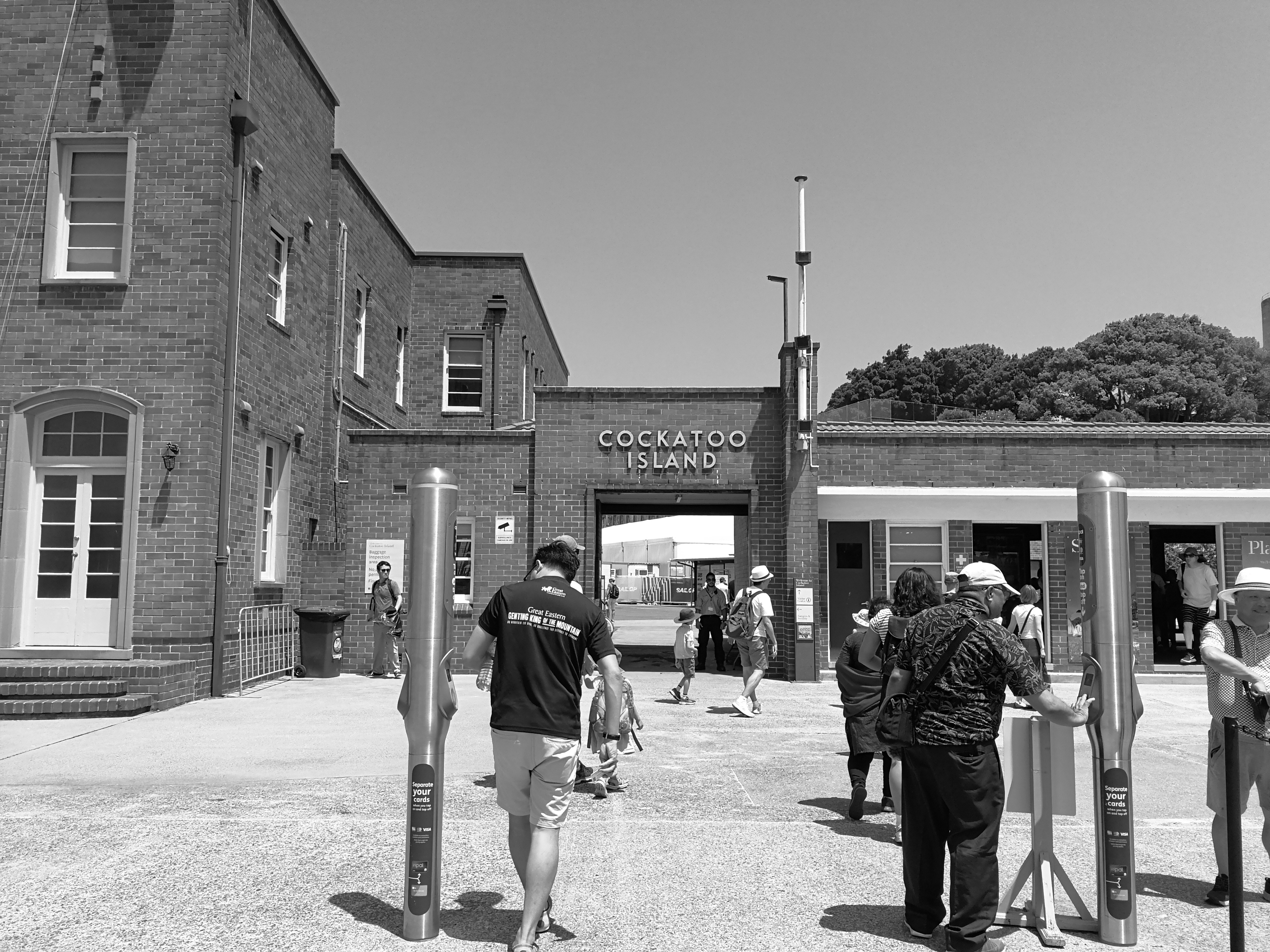 Never thought I would find an island to visit so soon in Sydney. I found one and went there as well. In my nutshell, I have always thought that Sydney is all about the Sydney Opera House and Harbour Bridge. There’s only so much you can do in Sydney I thought to myself. My apology, that’s not quite right. I’d better put on a pair of glasses and have a better look at Sydney’s map from now on.

As a money-savvy couple (cough cough we splurge when we wish to) we would look out for a place to visit on our Sundays. Reason? It would only cost us $2.70 max to travel in Sydney on Sunday.

Well, I came across a list of places of interest and there’s this place called Cockatoo Island in Sydney. To be precise, in Sydney Harbour which is smack right in the city. It’s accessible to us by public transport because we have not got a car yet back then.

COCKATOO ISLAND IT IS! Welcome to Cockatoo Island, because it is free to explore.

We spent a good 4 hours there and got the audio tour for $5 each. Enjoyed the island so much. There’s a mini competition between B and me, who started the next audio track earlier than the other (a lame competition but that’s what we do all the time).

Let me show you a little more on the island.

Cockatoo Island is only 18 hectares of surface area. It is 500 metres in length and 360 metres in width. If we were to walk from one end to another, it would take us probably 10mins without any breaking a sweat. Wait did I just said I spent 4 hours on the island?

Look at the green spot there, that is where Cockatoo Island is within Sydney Harbour.

There’s camping ground which you could bring your own tent over and all you need to do is pay a small amount for the nights you camping on the Island. There are also options you going without a tent and still being able to camp. Look at the tents that are nicely all you need to do is make yourself available. Of course it would cost more compared to bringing your own tent.

Look at the nicely lined tent and with platforms as well. There were plenty of toilets, shower and most importantly clean water. Seriously, great for the first timers. I am definitely giving it a try soon.

If you’re not up to such adventure, you could stay on the island for the night with comfort as well. There are properties you can rent for the night as well. I guess some googling will get you there.

Cockatoo Island is a UNESCO World Heritage Site. It served as the convict prison from 1839 till 1869. Later, the prisoners were ordered to build prison barracks, military guardhouse, and official residence. In 1847, prisoners were instructed to dug Australia’s first dry dock, Fitzroy Dock and to build a workshop to serve the Royal Navy and other ships.

These were some iron machinery that was left behind. Some of these items sold to companies in country but remain the island because they were too heavy to be moved to the rightful owner.

This is the Convict Precinct and behind us in the photo is the where the guardhouse. Look at the small openings on the wall. They were for the guard to put their guns there to shoot the rebel convicts in case there’s a need. That’s the only photo we took (or maybe myself) in the convict precinct because I normally do not take photos of places of such. Reason? I felt uneasy to do so and it’s a form of respect to the past (or my kind of respect to the history).

Please excuse my feet. We walked quite a bit with the audio tour in hand and passed through this place. We walked on top of limestone or sandstone. I can’t recall what I heard from the audio tour but it’s definitely one of the two (fail travel blogger wannabe). It’s special to me so I gave it a snap, my footwear hahaha.

The island steadily expanded and became major shipbuilding and dockyard facility in South West Pacific during World War 2. There were activities such as refitting and repairing on submarines carried out on the island as well. Support and shipbuilding were carried out until the year 1991. The island was closed in the year 1992.

Restoration work was carried out since the year 2001 when Sydney Harbour Federation Trust assumes control over the island. After extensive restoring, the island was open to the public in the year 2007. In 2010, Cockatoo Island and 10 other historic convict sites in Australia was listed into the UNESCO World Heritage Site.

The Fitzroy Dock, the first large graving or dry dock of Southern Hemisphere.

These are the cranes that remained and the once workshops in the photos as well. Some of the workshops are currently occupied as well.

The crane is relatively new as it was dated 1942.

We couldn’t make it in time for the Industrial Precinct. It’s a shame but entrance is free so we shall return for it soon.

Here’s some leftover shots that I’ve taken in black and white.

Some really old workshops, they are really a little rundown. It’s what we call history.

Walking back in time.

One of the residence that was built over time and the old mailbox.

If you notice the dent on the right side of the wall, it is the rock cut silos underground silos that was dug by convicts to store the colony’s grain supply.

Walking around Cockatoo Island really brought us back in time. We would definitely return to camp or just to chill on the island.

Hope you enjoy this article! See you soon folks.