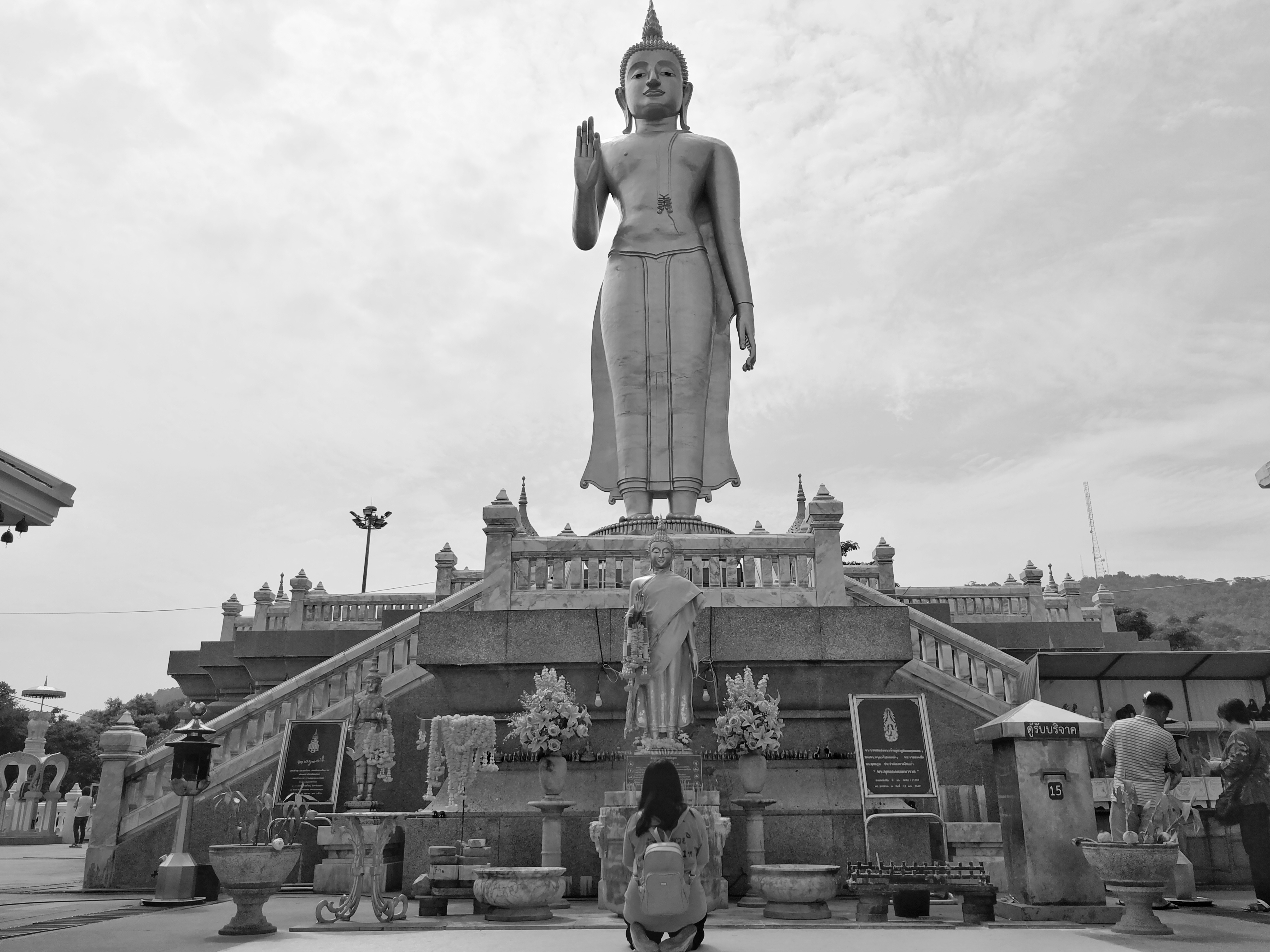 A week ago, my family and I went on a short trip to Hat Yai or more commonly pronounced as ‘Hup Zai’ in Penang. Hat Yai is a city in southern Thailand and the largest city of Songkhla Province. It is 226km from Penang island where we departed from and it took the driver approximately 4 hours drive (breeze drive).

My parents brought me to Hat Yai probably more than 20 years ago which I don’t remember a thing. I will take this as the first time visiting Hat Yai. There wasn’t anything in my mind that I had to visit or do there. I took it as a trip with the main priorities of accompanying my grandma, aunts, and cousins.

It was such a relaxing trip whereby we basically follow the flow. My aunt was the one getting the itinerary, transportation, and accommodation arranged with the driver which I am grateful for throughout the trip. Is that a sign of aging whereby I enjoy doing nothing on vacation? LOL

I shall share whatever I have in my pocket (I meant phone gallery). 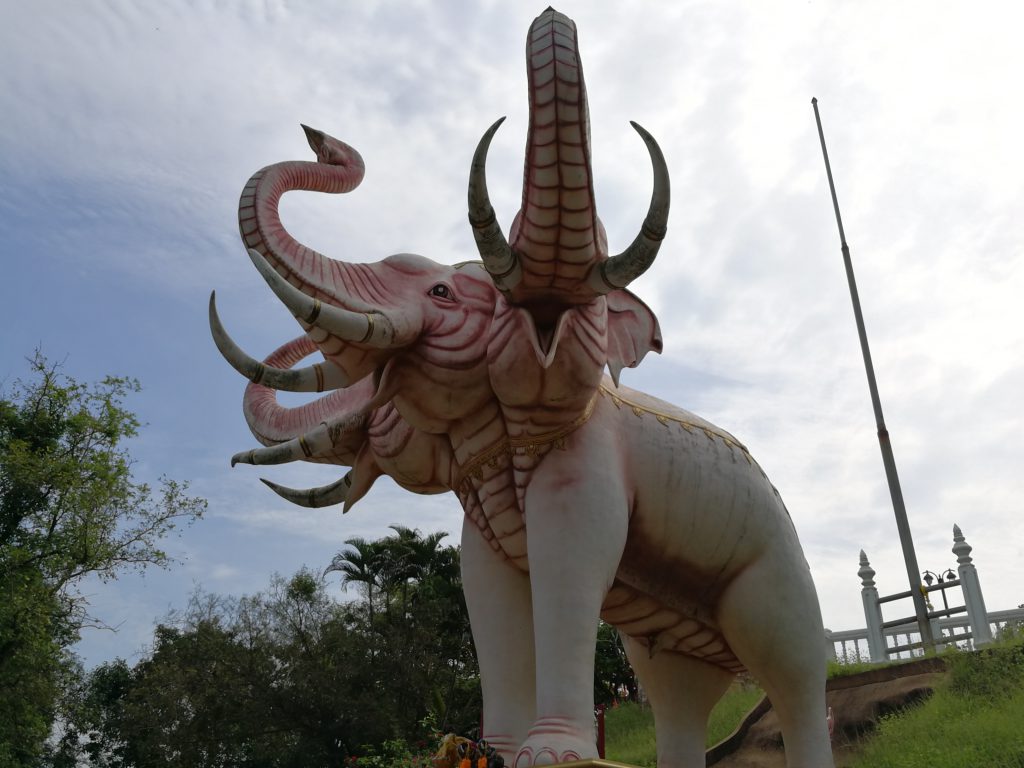 As well as some bells for devotees to ring along their way up the stairs. 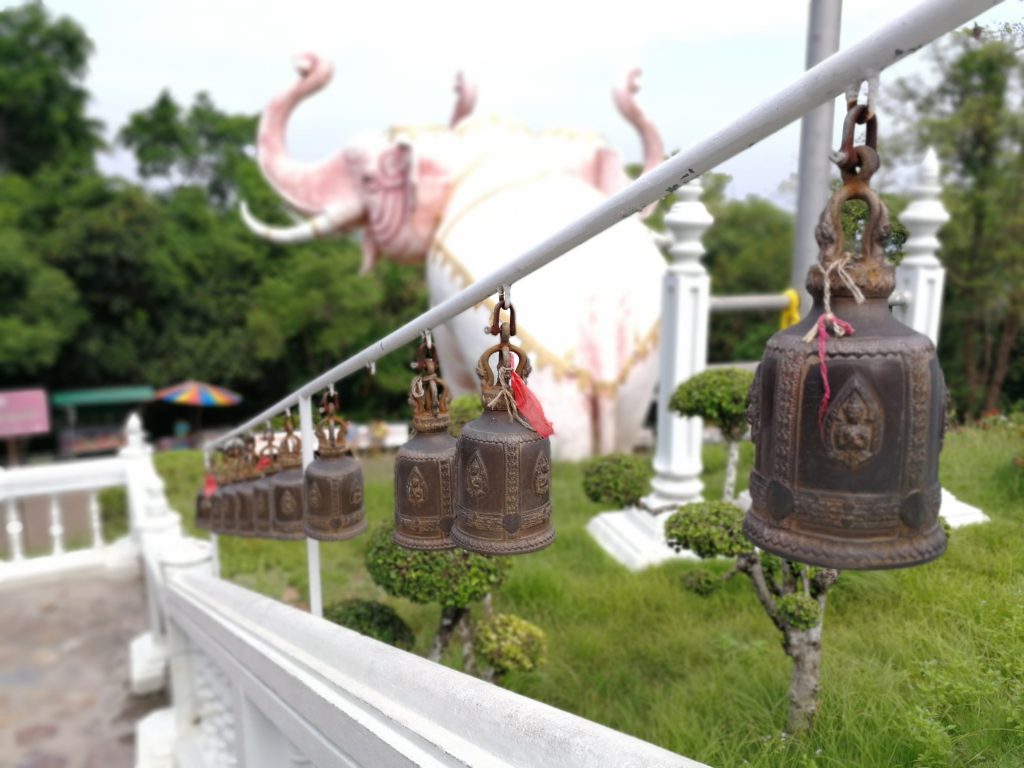 The Four Faces Buddha is surrounded by different sizes of elephants which were donated by devotees. There’s also a firecracker housing in which the devotees can pay and light up firecrackers for good luck. 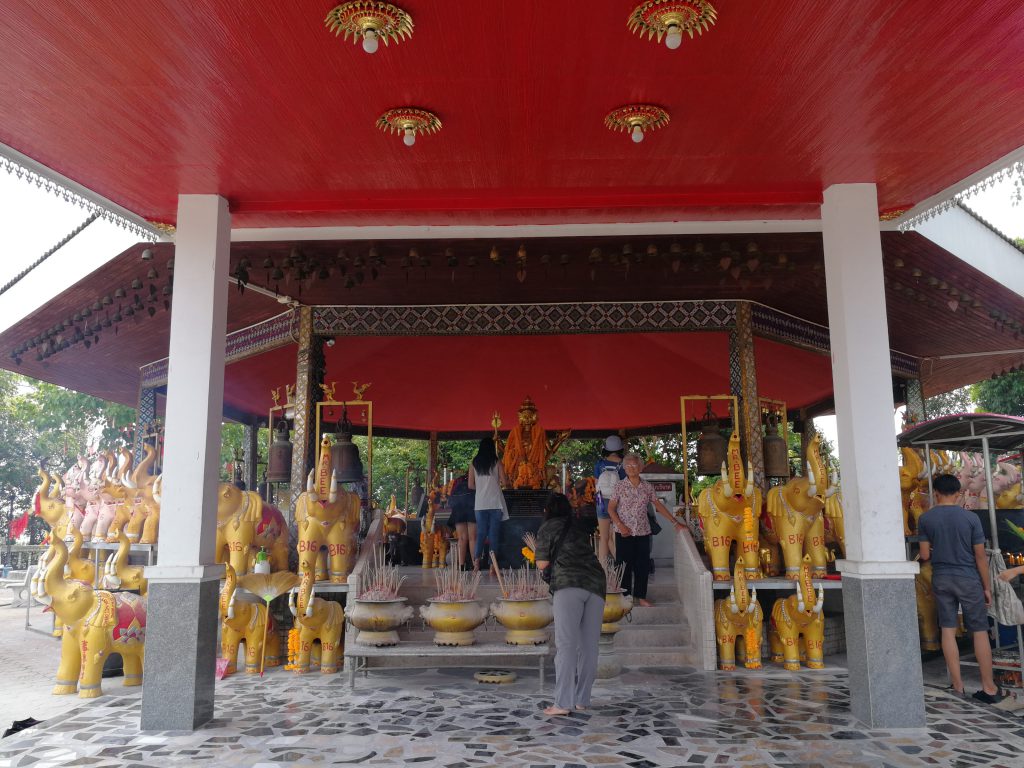 Grandma was so discouraged to visit the Four Faces Buddha Temple initially due to the steep slope leading up. After some persuasion and walking with her, she managed to reach the shrine. Look at her, roaming and pacing down the stairs. 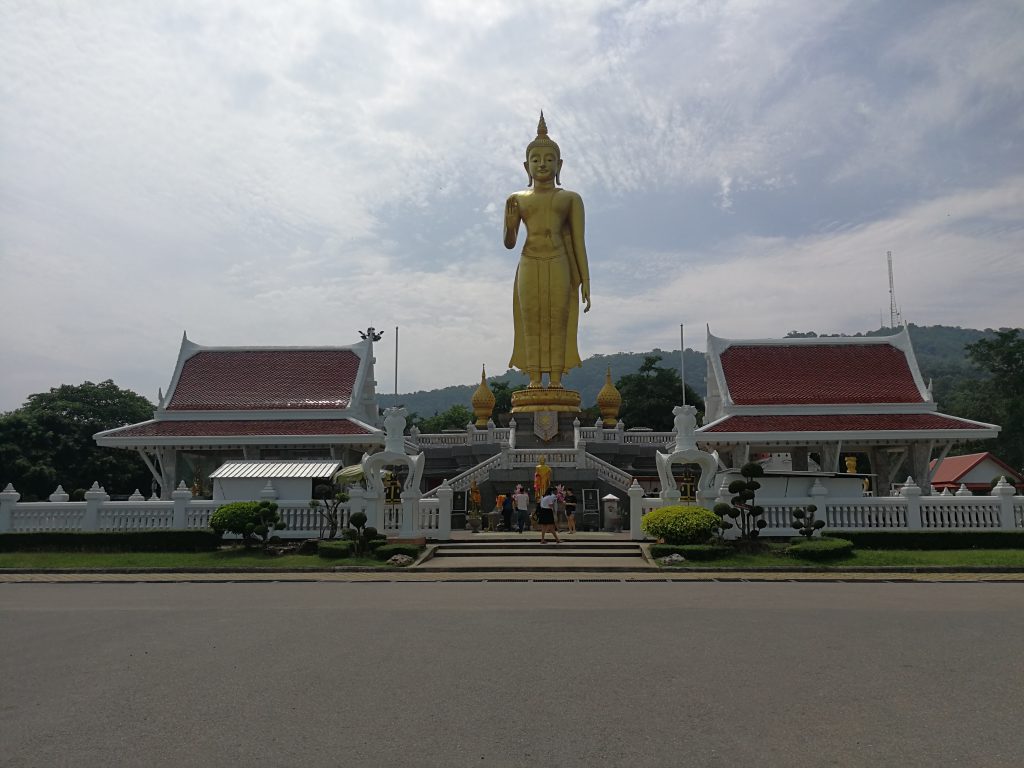 Right in front of the Standing Buddha, the view was great overlooking the city. It was a scorching hot day, I popped a remark to my brother saying ‘Wow look at the view’ and run for shelter (extremely warm that day).

Bells surrounding the Standing Buddha Temple for devotees to ring them. Here’s my aunt striking all the bells. 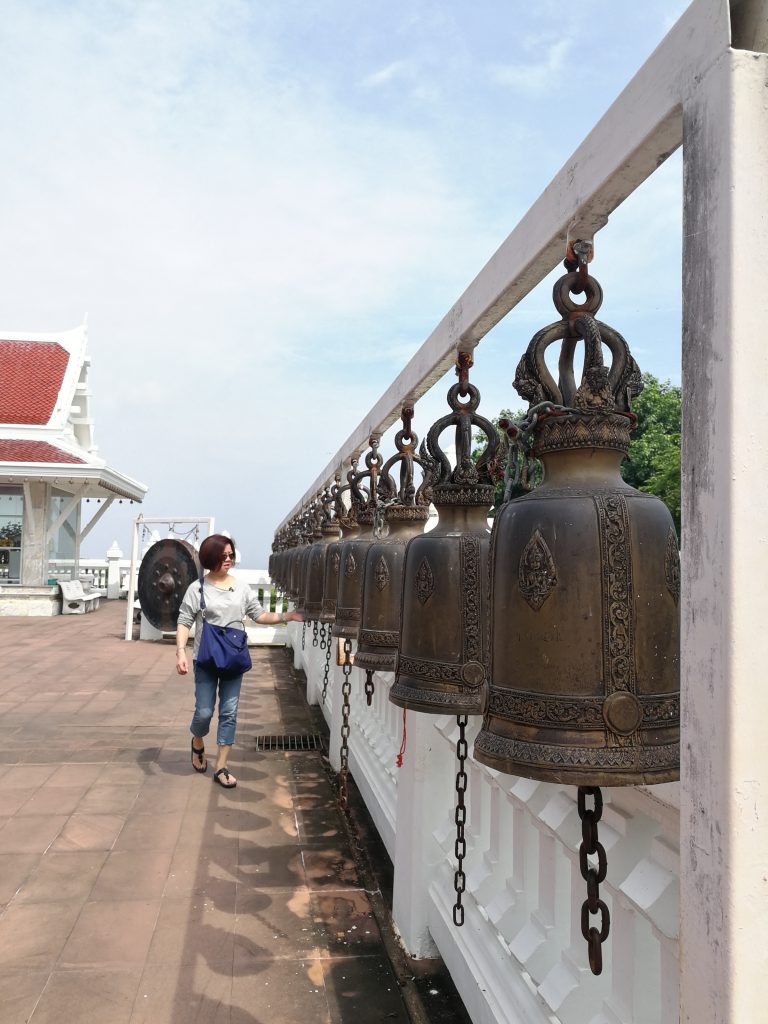 While the old folks immerse themselves roaming the temple, here are the young taking a group-fie. 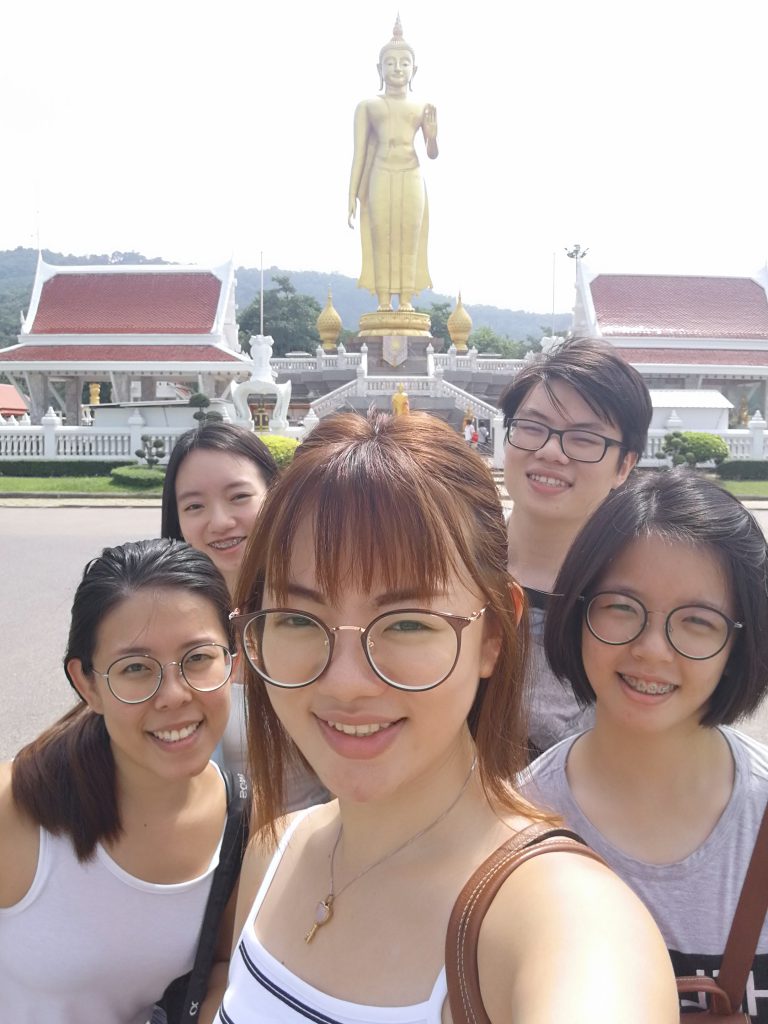 One last side view of the Standing Buddha before we left. 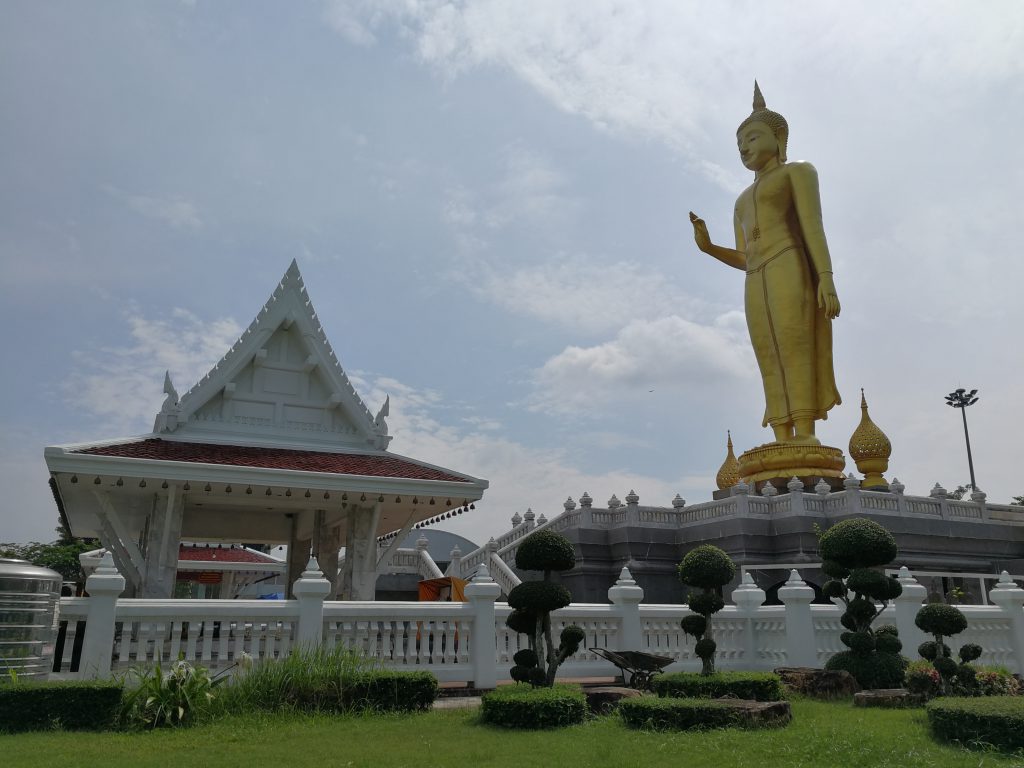 We visited another temple in the vicinity (Boddhisatva Guan Yin) which I never take a single photo from there. Too many temples at a time. 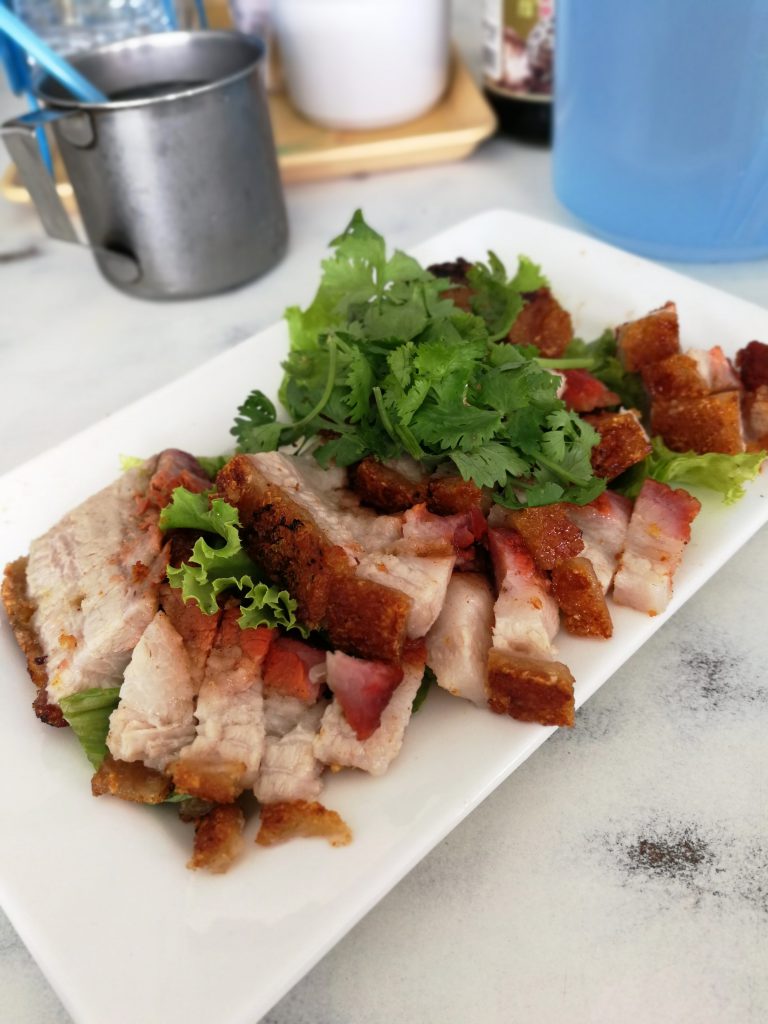 Thais are generous with their portion and here’s the huge ass vermicelli soup with meatballs. 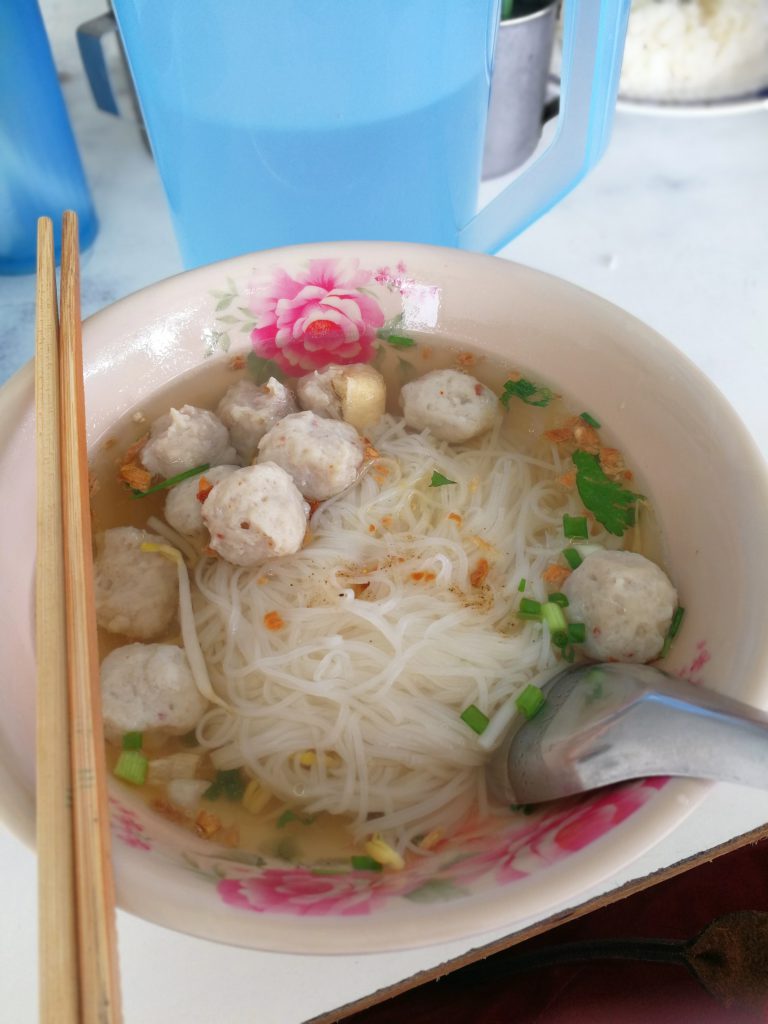 We were then dropped off to check into our hotel, Diamond Plaza Hotel. We booked 4 rooms in total and the staff was kind enough to give a connecting room. It is so convenient for us, we have old folks we can keep an eye on yet don’t get disturbed sleep due to out late night outings.

Talking about late night outings, it’s more like night owls hunting for food or going for a massage. My uncle and aunt brought us to a stall which opens in the evening for Thai Koay Chiap. It is pork broth with noodle in sheets which broke into pieces and came with pork meat and pork intestine. The broth is good and I love the noodle so much. I will love it even more if there’s no pork intestine and perhaps I will opt that out next time. 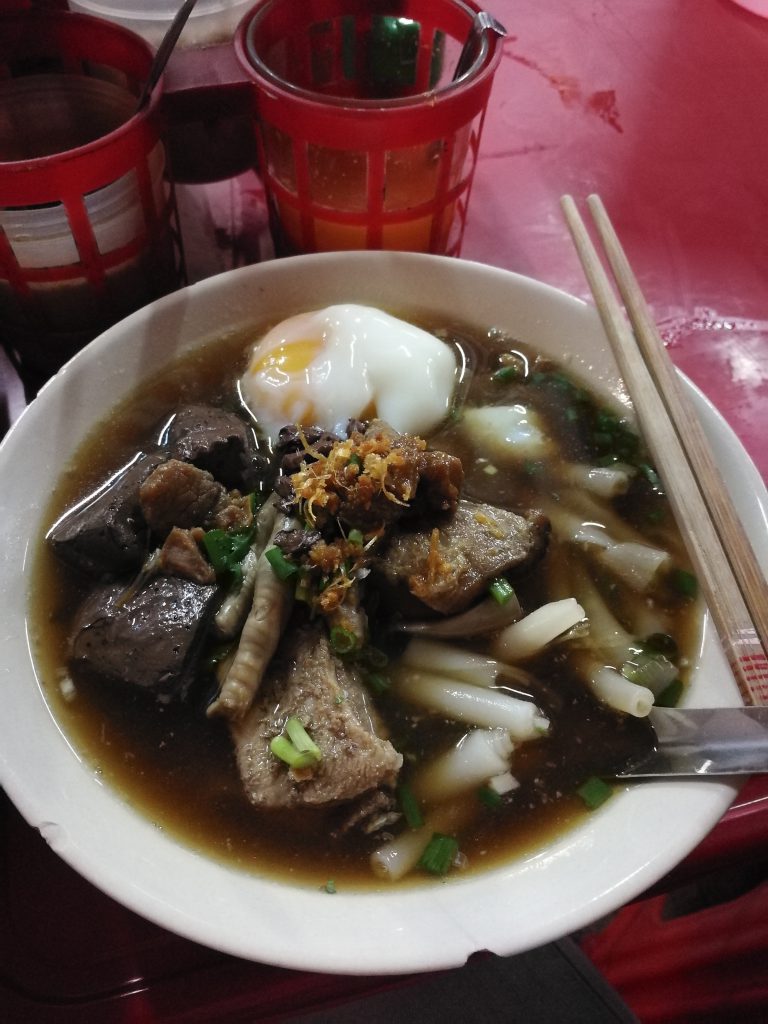 There’s also an option to swap the noodle to porridge. 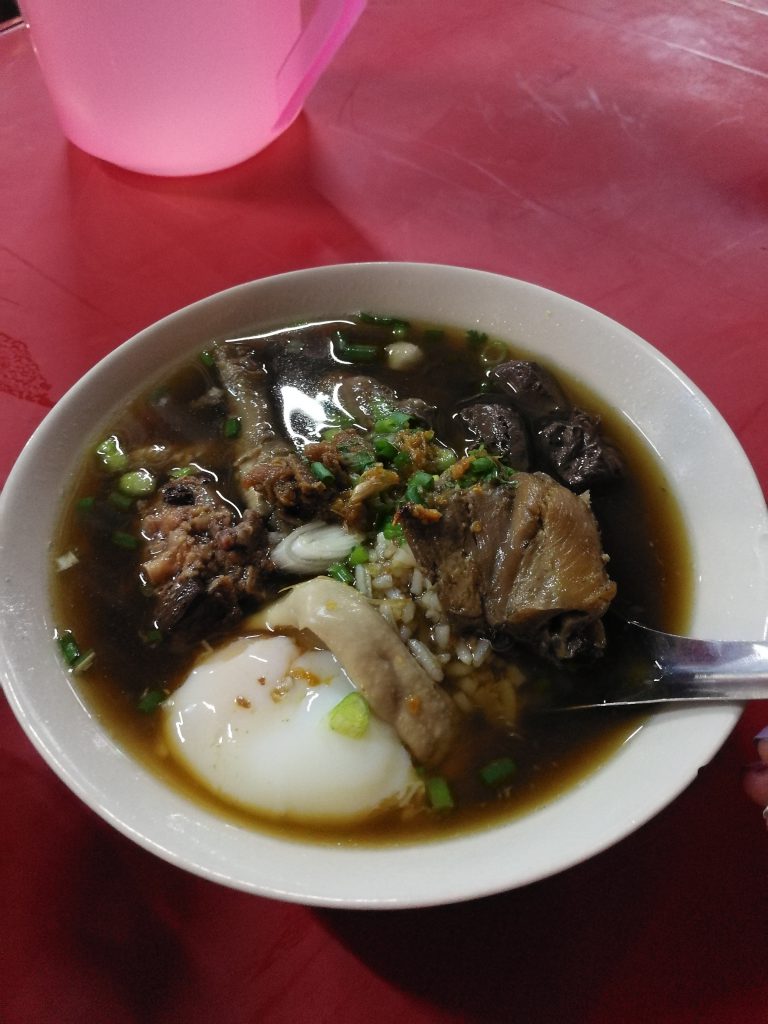 Another place that we visited worth mentioning is the Wine Village (Pruksa Park). According to the driver, the place is a hype now as it is picturesque. Here’s a few of us decided to take a group photo, didn’t manage to gather everyone because a few of them had already rushed to the van. 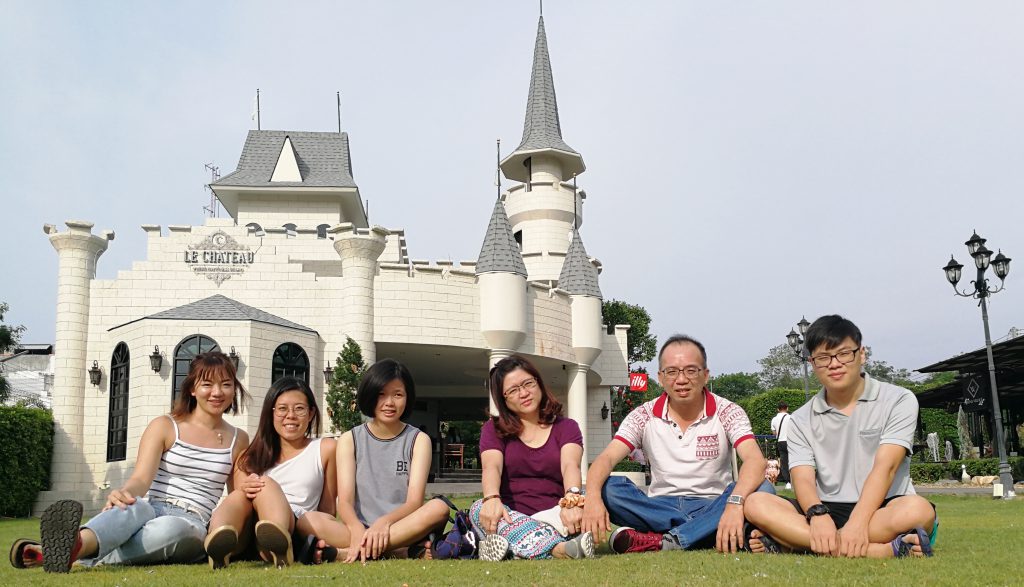 I get excited when I see pet (Sheep considered a pet?). There are some sheep, rabbit, and bird in the park. Coincidentally the caretaker let out a small herd of sheep which we manage to catch a show of the sheep running towards the area. 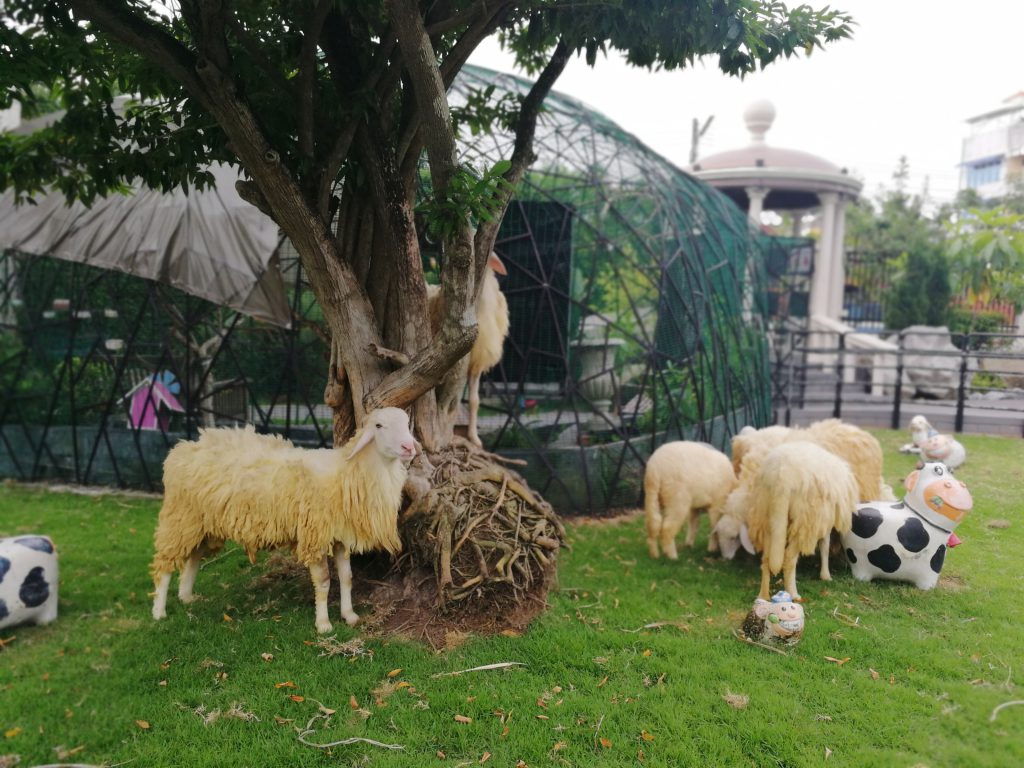 It’s really picturesque and I found a wall filled with fake vertical greens. Pulled my cousin sister for a photo with my brother behind the phone camera. 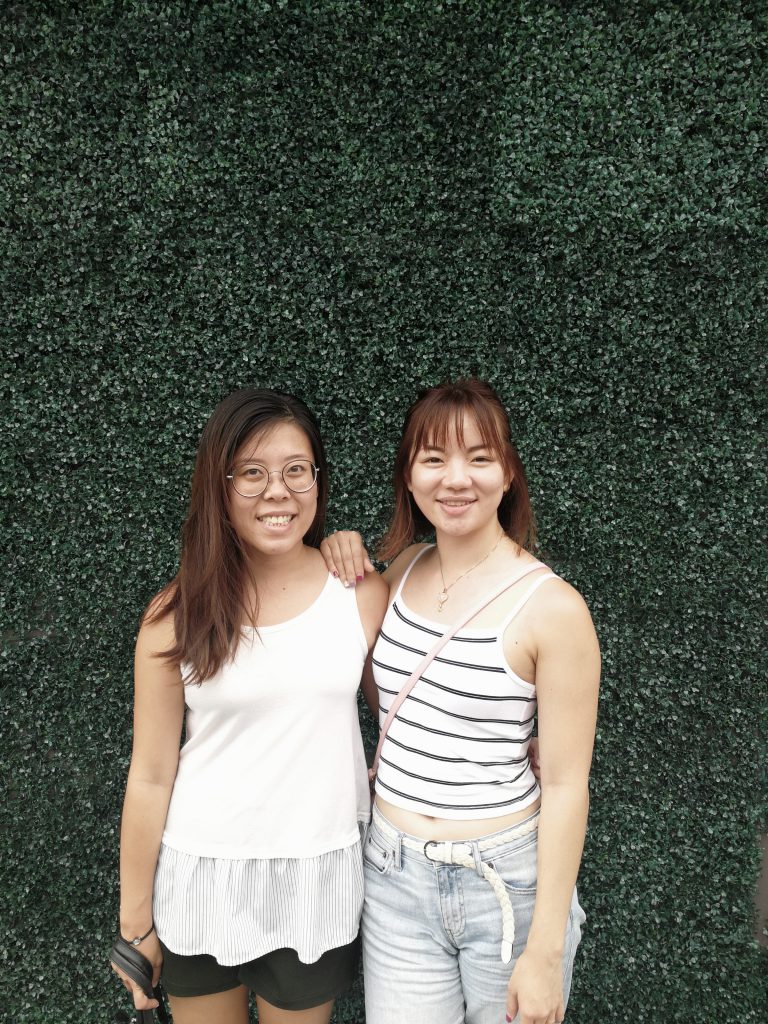 There are plenty of day and night markets in Hat Yai. We went to Kim Yong Market and Big Market Hatyai (just next to the clock tower) in the day to get nuts, cuttlefish, and fruits. We visited Asean Night Bazaar and Greenway Night Market to shop for clothes, accessories, and bags.

Plenty of shopping was done in the city of Hat Yai, Central Department Store, and Odean Shopping Mall as they are nearby our accommodation.

Finally, photos that I love so much on this trip with my grandma. We were roaming in the endless night market (according to my grandma), she would rather find a place to sit and people watch. Came across this and I decided to ask her to sit down so we could get some photos with the photobooth hahaha. 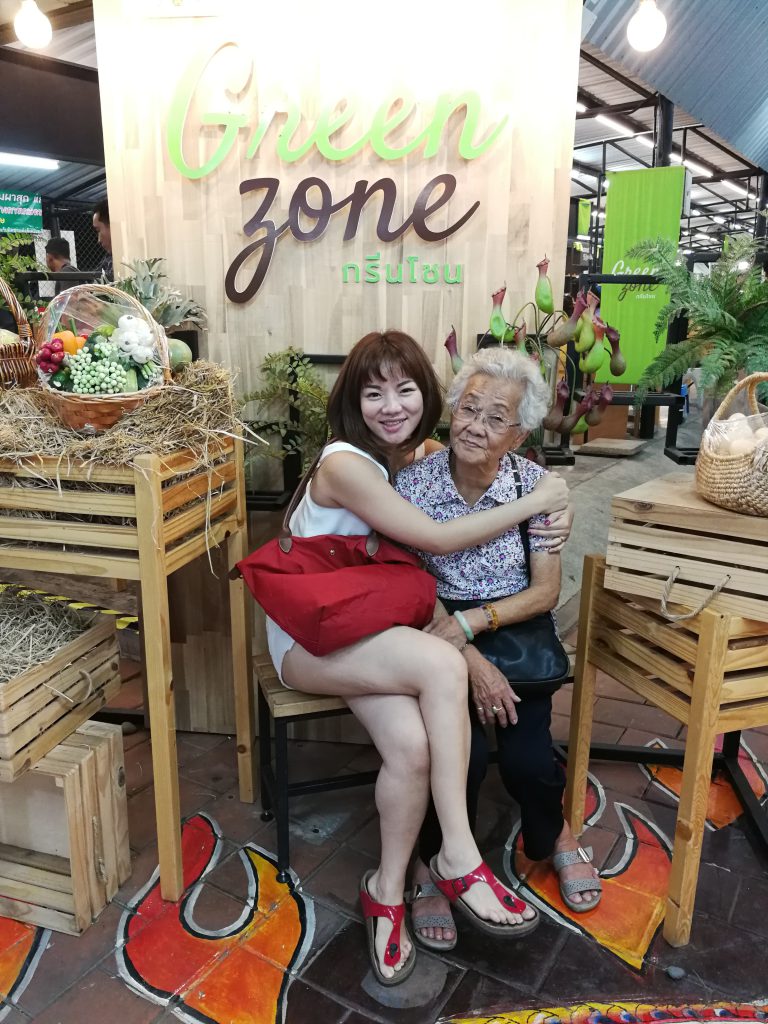 Annoying and teasing her when I see her as usual. Take photo also must annoy her. I so wanting to plop my fat thigh on her already but I was afraid that she will smack me in the public. 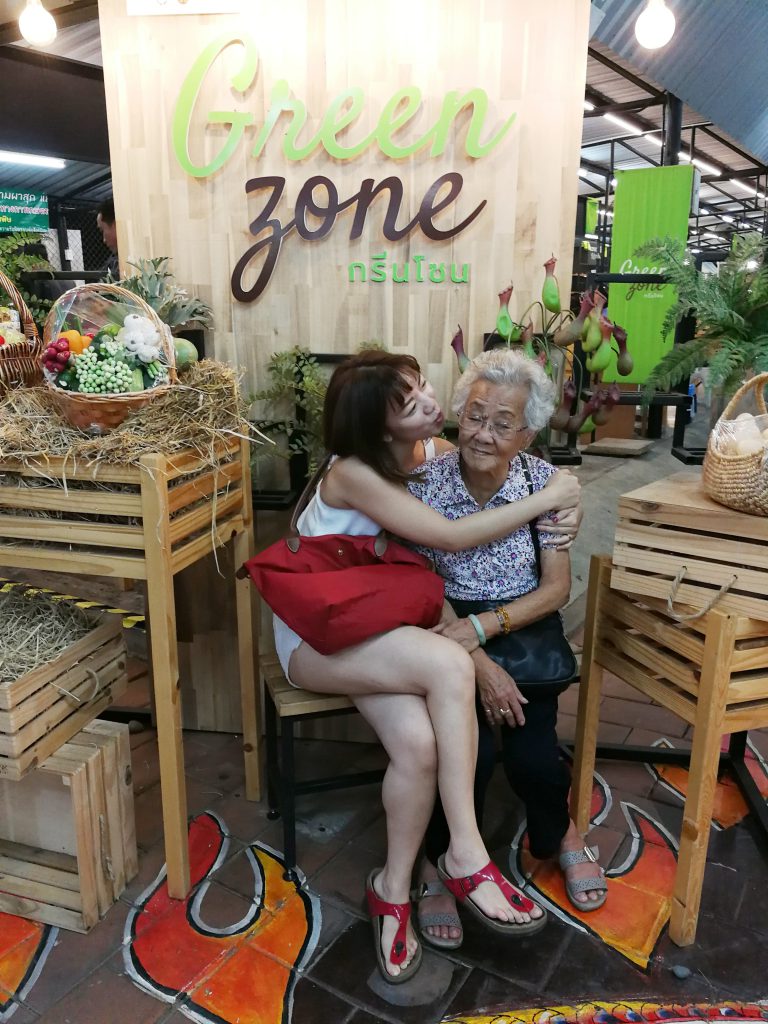 Another one of my brother with grandma. 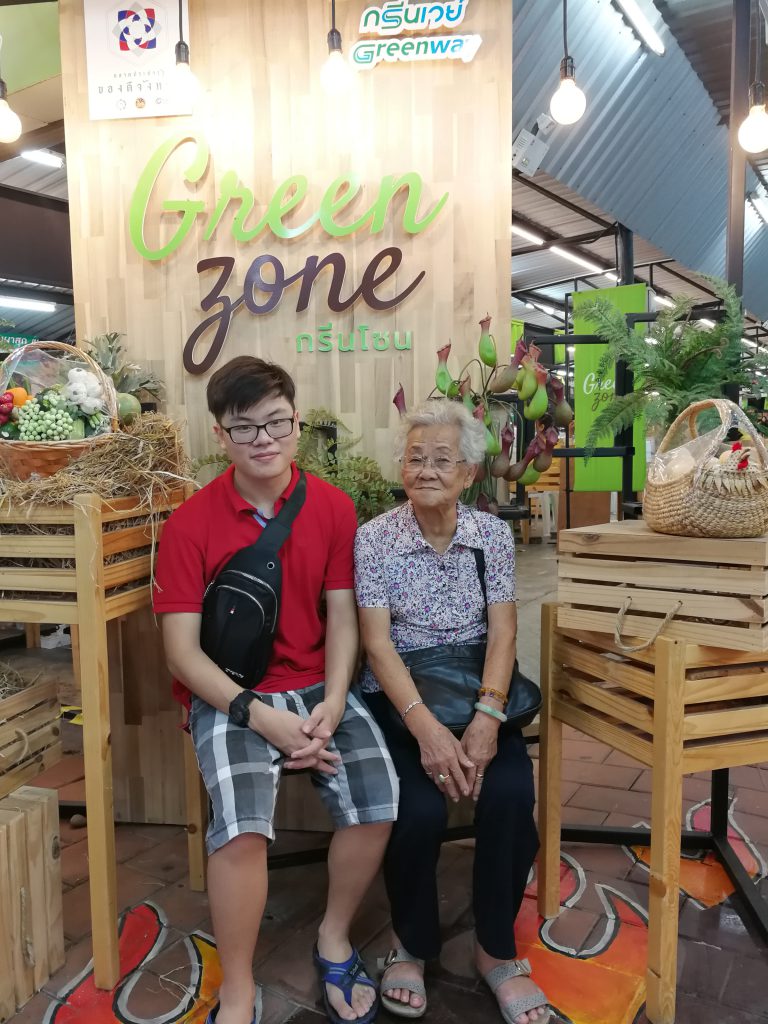 .Such a shame I didn’t bring my camera with me for the trip, or else there will be more photos I suppose. All in all, it was a wonderful trip and I am grateful that my aunt sorted most of the details such as getting a driver and accommodation booked.

I don’t have to waste my brain cells for the trip and just follow the flow.